Character Course with Susan Harrison - What to expect and her favourite exercises. 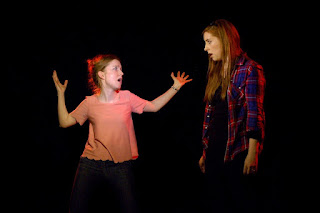 Caught up with Susan Harrison to find out about her Character Course at Hoopla.

Hi Susan, what can people expect to be doing on your course?

The character course is a fun and energetic opportunity to improvise numerous characters and to explore the various routes in to characterisation. Students will be on their feet a lot, improvising, having fun with different characters and being pushed as far away from being themselves as possible!

What are your favourite character exercises?

1) Royal Status Game. This is a Keith Johnstone classic in which a high-status king/queen is alone on stage and servants come and tend to him/her. If they annoy the Royal person in any way, he/she clicks their fingers and the servant dies. I love this exercise because it forces people to play boldly. Often people think they are playing low status but you can always go lower! And the same can be said of a high-status character. Also, this game encourages making a choice rather than being polite and importantly it’s very, very funny to watch.

2) Hot-seating. I love hot-seating characters. Whatever the inspiration of the character, it’s fun to try and draw them out of the improviser through an interview. It’s great practice for the performer to stay in character for a sustained amount of time and it’s a great one for spontaneity.

3) Peas in a Pod. There are numerous variations of this but essentially the improvisers are all playing versions of the same person. I LOVE this exercise because when it goes well it proves the power of agreement. It’s especially great for beginners who may be tempted to go for conflict as a default, as it demonstrates how funny a scene can be when there is no conflict present. Also, it’s great for observing each other. Often on stage, we think we’re listening or we think we are observing but you can always listen and look more closely.

----
Susan's next courses at Hoopla are starting in September.   Susan performs regularly on the Hoopla stage with BEINGS, The Playground, The Actor's Nightmare and her EdFringe show 'Susan Harrison Is A Bit Weepy'.   She is also part of the Olivier award-winning Showstopper! The Improvised Musical, performing on the West End and their international tours. www.hooplaimpro.com