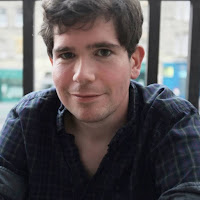 Hoopla Teacher Liam Brennan shares his favourite games for first time performers and why they are good to play.

Story Director is a good shout for first-time performers as they can focus on the pure act of improvising. The performers simply have to listen to the ongoing story and take over when it’s their turn.

First off, you need the title of your story. I like getting an animal and a word from the audience and combining that into one title, such classics include ‘The Cat’s Pyjamas’ and ‘Giraffes and Ladders’.

At the end of each chapter, the Story Director swaps roles with one of the Story Tellers. At this stage, I like to get a suggestion from the audience as to what to add to the story in this chapter (genre, famous fictional character, an object) but do whatever feels most fun.

I’ve loved playing this game ever since I learned improv was a thing as I always had so much fun playing it. It’s a great chance to work with playing with the big offers presented by the columns who join the performers on stage.

Have two performers in the middle of the stage (or rehearsal room, living room, park, shopping centre, foyer of the Barbican or anything else, hereinafter called “the stage). Have two extra performers playing the columns, one on each side of the stage. Get a suggestion from your audience to inspire a scene for the two performers and you're ready to play.

As the two performers play the scene, at any point they can tap either one of the columns who will give them a word or two to fill in a blank left in their sentence.

I’ve only recently learned this game and it’s so fun I wish I could go back in time and tell my younger self to play it at improv gigs (and while I’m there, I’d also tell my younger self to learn Mandarin so I could get a head start in communicating professionally in the largest market in the world). It’s similar to Story Director in that the performers only need to focus in on listening but it also adds in some fun additional elements.

Have two pairs of performers on stage. One pair will be writing a complaint letter and the other pair will be playing the complaints department of a real-life company (Google, Anne Summers, McDonald's, etc) which you will get from the audience.

The complaining pair will then write a complaint letter between the two of them, each player only being able to say one word before the other player also says one word. They alternate between each other saying one word each until they finish the letter.

After the complaining pair has finished, the complaints department will reply in the same way. Have the correspondence go back and forth a number of times.

Similarly to Columns, this is a game I’ve loved since I first started improvising. It’s a great game for first timer performers as they get to lots of short and fun scenes.

Four performers get into a square formation, two at the front and two at the back, all four facing towards the audience. A fifth player acts as the host and every so often will ask the players to “Pan Left”. When this happens, the players will take the position of the performer that is anti-clockwise to them, so everyone ends up in a different position. There will be four different pairings of front performers and all four pairings will get a different suggestion.

The front pair of players will perform their scene until told to “Pan Left” and then the next pairing will take over by performing their scene and this will continue until the end of the game.

This game is particularly great for big groups of first time performers. It encourages spontaneity and just doing what feels fun in the moment. It has been scientifically proven that this game encourages more yoga scenes than any other improv game in history.

Two performers get on stage and strike a pose based on an audience suggestion. This could be trying to recreate a number with your body or a household chore but really it could be anything that inspires a pose. These two players then use their physicality to inspire a scene.


Remember, you can’t get any of these games wrong! If you change any of the rules you haven’t broken the game, you’ve actually invented a new one and you’re actually an improv super genius!

----
Liam teaches the Beginners, Performance and Long Form courses at Hoopla. Next courses starting in September.  He also performs on the Hoopla stage as part of improv troupes The Science of Living Things and Fright Club.  www.hooplaimpro.com
Posted by Hoopla at 11:46